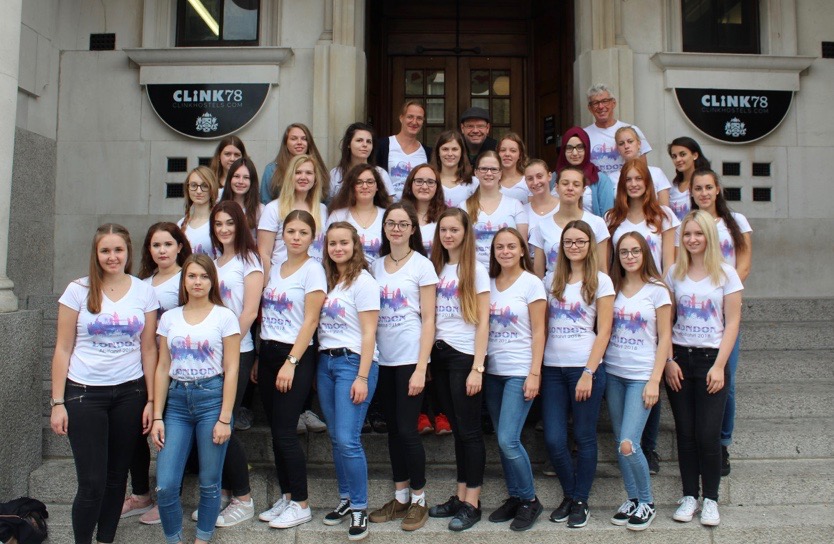 Let’s go to London and dive right in!

According to this motto thirty-one students of the Elly-Heuss-Gymnasium packed their bags and set off on a journey no one will ever forget. After twelve hours on the bus and a very calm passage across the Channel the group under the guidance of Mrs. Kitzinger, Mr. Gilch and Mr. Renner set foot onto British soil. Although the night had taken its toll, everybody was excited to see the first highlight: Canterbury Cathedral and the cute small town around it. It was here where most students had their first contact with the British culinary world. That the Brits are famous for their love of tea and that they absolutely know how to make fantastic sandwiches would save some of them from starving during the following days.

The Clink hostel was where stayed and after arriving everybody just wanted to lie down for a little while. But not for long. The big city wanted, even demanded to be explored in all its glory. The following day was filled with a guided tour and some sightseeing. Our guide was born in Schnaittenbach but has been living in London for over twenty years. She introduced us to all the famous sights but also the infamous hidden corners and stories where not exempt. As for evening entertainment London is the musical capital of Europe and everybody had the chance to see world class musicals for a rather fair price. As our first day in London was packed with new things to see and awesome experiences, we all fell into our beds at the Clink at night. The Clink by the way used to be an old court house and some of the rooms are actually former prison cells, but we didn’t worry, there was nothing spooky about that.

On Wednesday we went to St. Paul’s Cathedral with its astounding architecture and in the afternoon the students could choose between going to Camden Town with its food stalls and little hip shops and Madame Tussauds.

Thursday was our trip to Oxford and later to Stratford Upon Avon, Shakespeare’s town of birth. In Oxford we went into one of the old colleges and felt just like Harry Potter. In the afternoon we were taken to Stratford where our guide showed us how the people of Shakespeare’s time lived and worked. Back in London it was already time to pack. Some of us had bought so many souvenirs that hauling everything to the bus was rather tricky. But we managed. Keep calm and carry on as the Brits say. On our last day we took a walk around London for a change. The tube is very fast and convenient, but you don’t see too much from down there. So, we went on a walk form the Houses of Parliament to Westminster Abbey and to the Horse Guards, through Green Park and to Buckingham Palace and on to Hyde Park corner. Sadly, this was it. The trip had to come to an end and the only thing left for us was to go back home. We arrived back in Weiden on Saturday full of experiences and pictures in our heads. Leaving the city behind us many made a promise to come back as soon as possible.